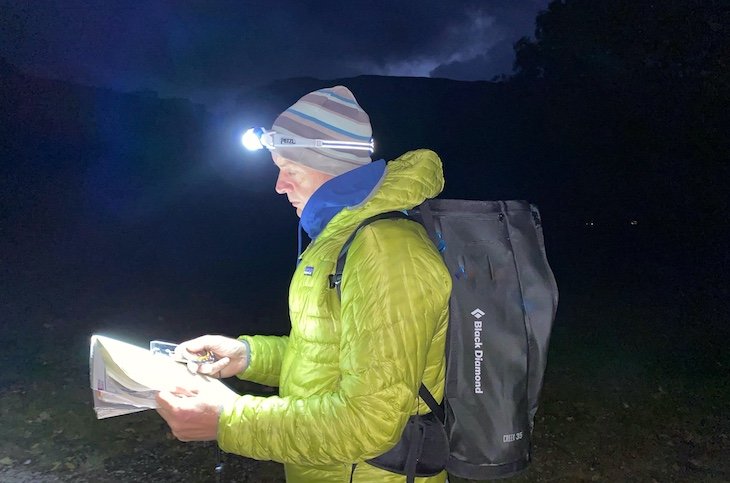 Petzl have been leading the way in outdoor lighting since the legendary Zoom was released in 1981.  This Petzl Swift RL Headtorch review really highlights how far things have come since the early days.  Maybe this new Petzl offering is the only headtorch you’ll need for all your adventures?

The Swift RL is both a feature rich package and a reduced feature package. Just to be clear though, I mean that statement as a positive!  In my opinion Petzl have struck the perfect balance here. They have included the key things you’ll need while keeping things simple.

The torch looks simple enough as well.  It is very compact and everything is incorporated into the head unit.  There is a single button and elastic head band.  The head has two lamp units and a third sensor which I will describe later.  Petzl have packed in a 2350 mAh lithium battery which is rechargeable via USB type B.

The Swift RL features their superb Reactive Lighting technology (more about that later).  Oh, and did I mention the Swift RL can pump out 900 lumens of light output from a unit weighing only 100 grams!  Yes,  I did say 900 lumens and I did say 100 grams.  That is simply staggering.  These features surely make this the new industry benchmark in a head torch the will suit everyone from trail runners to mountaineers and cyclists to dog walkers.

So, in completing this Petzl Swift RL Headtorch review, the question is where to start?!  When you pull a headtorch out of its wrapping do you pull it on your head first or play about with the switch?  I’m definitely a switch person and so let’s start with that.

The Swift RL features a single switch and so working out the modes doesn’t take long.  Each press cycles you through from max burn time to standard and finally max power. One last press and the torch is off.  That is it for the constant light output modes.  For Reactive Lighting a longer press will engage that option.  Many earlier Petzl models had more than one button and so the simplicity of this is a refreshing design.

Another problem I’ve had with some previous Petzl headtorches is that the button can be easily turned on accidentally.  This once caused me quite a problem.  The switch engaged in the top pocket of my rucksack and when I pulled it out for a long night time descent I found the battery completely drained.  It is great to see that Petzl have incorporated a sliding lock to the switch which should prevent this possibility.

One criticism of Petzl headtorch designs has always been that the on/off button has been very small.  This can make them hard to operate in gloved hands.  Well things haven’t really changed. The switch on the Swift is quite small too.  I’ve tried it with various types of gloves and it will work with any I’ve tried, but I would have preferred it bigger.

There is a very much appreciated simplicity to the operating system of the Swift RL though.  It is actually a breath of fresh air compared to some previous models. In reality, having the Reactive Lighting function makes switching between modes rarely needed anyway.  You will almost always just turn it on and it does its stuff.  So let’s consider what Reactive Lighting is all about.

I first used Petzl’s Reactive Lighting technology on an early version of their Nao headtorch.  That torch featured in a review I wrote at the time for UK Climbing and you can still read it here.  When I looked I was shocked to see that was published back in 2012!

So, Reactive Lighting has been around for quite some time and it was great back then.  I don’t know exactly what technical changes they have made in the interim, but it is superb now. In fact my experience of it on this torch has been faultless.

The principle behind Reactive Lighting is brilliant.  Put simply, the torch will adapt the light output to suit your proximity to an object or terrain.  If you are looking at a map the output will drop.  Raise your head to view the terrain and the output increases.

The effect of this is two fold.  You get the light output you need when you need it and the torch doesn’t waste battery life when the light output isn’t needed.  This means your battery will last longer and you don’t dazzle yourself with close quarter tasks.

When I first tried the Nao all those years ago I thought this was surely a bit of a gimmick.  I soon realised it was anything but.  Reactive Lighting is a really great invention.  I remember thinking there were a few blips with it on the early versions, but in the intervening years I think they have got it completely dialled.

Infact, it works so seamlessly that you won’t even notice it until you don’t have it. Try it without and you’ll soon feel dazzled as you look at your map or have to adjust the beam intensity to spot that distant feature.  I love it.

As mentioned above, the other big advantage of Reactive Lighting comes with increased battery life.  As the torch constantly adjusts to the output required no battery power should be wasted.  How this equates to overall burn time is hard to calculate. It will obviously vary according to how much time you spend looking at distant objects.

Petzl do give burn time figures which say that on the max burn time setting of 100 lumens you should get 10-50hrs. On the standard 300 lumen setting it will be 5-40hrs and on the max power 900 lumen output you can expect 2-30hrs.

It is worth mentioning that the Petzl burn time stats are independently tested using the ANSI Plato FL1 Protocol. This is an independent body that offers manufacturers a standardisation system and is a great step in trying to get some consistency across the marketplace.

These inevitable variations in burn time do make planning tricky.  If you were wanting to complete an objective and needed to calculate battery life you’d struggle unless you used the torch on standard setting.  You could also carry an extra rechargeable battery and these can be purchased as an accessory for about £35.

It is worth saying that the battery for the Swift RL is a completely different unit to the Petzl Core battery some might be familiar with.  This also means that, unlike torches like the Aktik Core, you can’t use AAA alkaline batteries in place of rechargeable’s either.  This might limit the Swift RL’s suitability for some adventures where you can’t be sure the battery can be recharged.  The facility to switch in a set of AAA’s has always been a handy back up on longer or remote expeditions.

I was interested to see whether battery performance would be affected by temperature.  A night in a freezer allowed a simple test of that.  I completed a run time test between the battery at room temperature and it being run full to empty in a freezer there was negligible difference in performance.  I thought this a very impressive result given that this will be a key consideration for winter climbers and polar explorers!

As usual, Petzl have thought carefully about all the key details.  The headband features a two part band that means two elastic straps cup the back of the head and hold the torch really securely.  It feels both comfortable and stable. It has certainly held tight for everything from running to some test star jumps!

I wasn’t sure whether this band would work with the clips on a climbing helmet. Infact, you can still attach it to the selection of helmets I have tried although there is a bit of bunching at the back. Petzl have also added reflective threads to the band which is a nice additional safety feature.  The head unit rotates up or down effortlessly to offer any angle you need.  This is easy to do with gloves on as well.

The rechargeable Lithium Ion 2350 mAh battery clips apart from the main torch. Actually, it can be a little difficult to remove until you get the hang of it.  Having said that, for most circumstances you won’t need to take to off as you can charge the battery in situ.  Charging is via a type B micro USB port and Petzl include a charging lead.  It also has a series of LED’s that act as a neat battery charge indicator. This allows you to keep tabs on the available battery.  It is just a series of lights though and so only gives a general feel for the power remaining.

At full price the Petzl Swift RL will set you back about £95.00 although it seems there are plenty of bargains to be had if you shop around.  It can never be described as a cheap option though.  That said, completing this Petzl Swift RL Headtorch review has revealed it to be the most impressive head torch I’ve come across. I think the price reflects the quality and its inbuilt technology.

I have really enjoyed doing this Petzl Swift RL headtorch review for several reasons.  Mostly, this is because the torch has everything you need in a lightweight and compact package.  The easy to use controls, comfort, compactness, Reactive Lighting and, of course, that incredible light output.  Other details missing off some of Petzl’s previous models such as a locking function are now also included.

I am also really pleased that they have avoided adding unnecessary extras.  If you can do everything with one button it pays to not have more.  I am also not bothered at all that they have left off the bluetooth connectivity option of some other models.  It was quite interesting, but I mostly just want simplicity.  I also think that every additional feature is something that could ultimately fail.

So,  I know it’s expensive and I know it won’t suit everyone, but I reckon this is the state of the current art for high performance head torches.  In a word, it’s superb! The Petzl video below shows the features really clearly.

The Petzl Swift RL would be ideal for early starts or late finishes on one of our winter courses or overseas adventures.