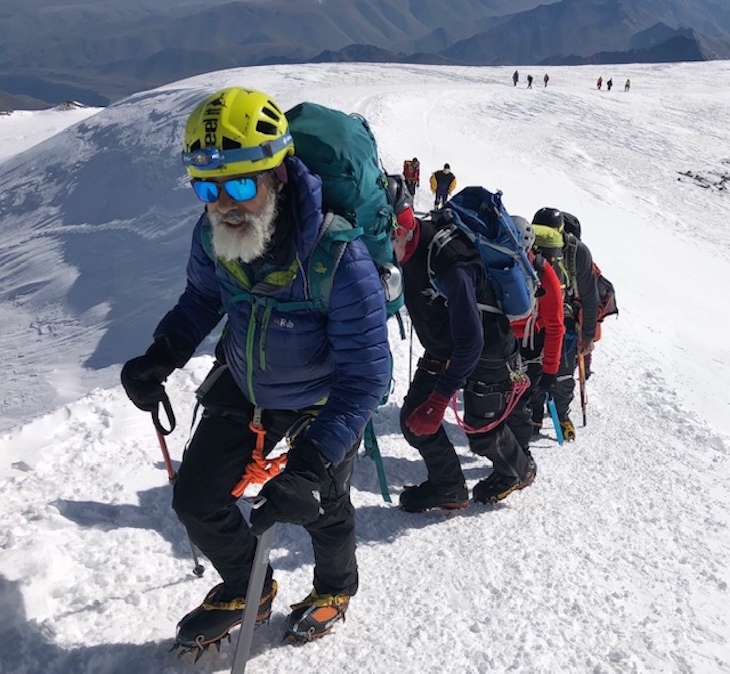 At 5862 metres, Mount Elbrus is the highest peak in Europe and one of the famed Seven Summits (the highest peak on each continent).  It sits in the Caucasus Mountains of Eastern Russia near the border with Georgia and is notorious for its changeable weather and often intense cold.  Over 11 days earlier this month Peak Mountaineering sent an 11 strong team to climb the mountain via the southern route. This is a report of the trip…..

The team assembled at the small airport of Mineralde Vody having travelled via various routes. Unfortunately, two of the team arrived to find their bags had been mislaid en-route and, after a report was filed at the airport, they had no choice but to take the transfer to the small ski village of Terskol and hope their bags would appear the following day.  It is about a 3 hour transfer to our valley hotel, and, having travelled overnight to get there, the team were keen to have time to rest, settle in and get to know the area near the hotel.

Terskol is a small place with just a selection of hotels and a few restaurants.  It has a nice sleepy feel and everyone soon felt settled.  After some rest and exploration we congregated for an evening meal in the hotel restaurant and we discussed tomorrow’s planned acclimatisation walk.

After a good nights sleep and breakfast, we headed up the road to take a walk up Peak Cheget.  This offers a good height gain to kick start the acclimatisation process and to let everyone find their feet.  There is a small chair lift that snakes up the hill and, after we arrived at the top to the start of driving rain, we used the lift to speed our way back to the valley.  The rest of the day was about organising equipment for tomorrow’s mountain day.

Unfortunately, the missing kit bags hadn’t arrived on the early flight and we had to start considering other options incase they didn’t come in subsequent days.  As it happened, they never materialised.  Luckily, this great group of people were already working strongly as a team and we held an afternoon meeting to find ways to ensure the missing gear was replaced.  Between the group we found a stack of clothing and other items and our hotel has a great kit hire facility that could sort out the rest.  It was bitterly disappointing for the team members to lose their precious personal kit, but at least we could ensure their summit attempt would still be possible.

On day 3 we took the nearby cable car up to 3500 metres and then walked up to visit our mountain hut at 3800 and onwards to 4100 metres to practice some essential crampon and ice axe skills.  This height gain was also excellent acclimatisation and it was interesting to share with the group that they were already at about the height of North Africa’s highest mountain, Jebel Toubkal.  We dropped back to the cable car and descended again to the valley hotel.

For day four things were getting more focussed.  This was the day we would be moving up permanently to the mountain hut that would be our home for the coming days.  There are various accommodation options on the south side of Elbrus, but I would strongly suggest our mountain hut, although basic, is about the best up there. It is easy to transport the team and kit up there via the cable car and so soon everyone was settling in to their dorm rooms and enjoying a good lunch.

For the afternoon we again headed up to 4100 metres to complete our skills training and continue the acclimatisation process.  The whole of summit day on Elbrus south is completed on steep snow slopes and so solid crampon skills are essential.  Everyone also enjoyed sliding on the snow while practicing ice axe arrest techniques – an essential skill to allow people to stop themselves if they slipped or tripped on the steep slopes.  Once finished, we headed back to the hut for dinner, card games, chat and sleep.  Monopoly Deal became a firm favourite with some of the team and others got stuck into books, watched downloaded films or just chatted until bedtime.

On day 5 we were heading up to a new high point of 4700 metres. This is a long and slow ascent up steep slopes and everyone, although tired, was elated to sit at the top of what is called Pastukhov rocks and enjoy the serenity and views of the beautiful mountain surroundings. Again, they were reminded that they now sat at near the height of Mont Blanc and for several team members this was a personal altitude high point.  Eventually, we descended back to the hut for another leisurely evening.  The acclimatisation process is key to a safe and enjoyable ascent and the team were very pleased with their progress.

Day 6 was scheduled as a rest and preparation day.  Living at 3500 metres helps the body adapt to the altitude and yet, like any mountain refuge, team members had to be willing to live in fairly basic conditions.  There are 8 bed dorm rooms for sleeping, very basic toilets and extremely rudimentary outdoor washing facilities.  There are certainly no showers.  Having said all that, we had a nice lounge, electricity and good quality food – it is basic and yet our hut offers a great base.

During the day people relaxed, dozed, read and chatted. We were enjoying exceptionally stable and warm weather and many team members also took the opportunity to sit in the sun, take photos and explore the area local to the hut.  There aren’t many places to go, but some of the team had a short leg stretch.

In the afternoon we met to discuss tomorrow’s summit attempt.  In our schedule we deliberately leave two possible summit attempt options and yet, with the strength of this team and the stable weather, heading upwards tomorrow made perfect sense.  We chatted in detail about equipment and other logistics and the team headed off to pack and prepare.

The south side of Elbrus is unusual in having the option to use one of the ski area snow cats to transport you higher up the hill.  Most people take this option and this team were unaminous in also wanting to do that.  The snow cat certainly feels like a welcome start to summit day and, as it largely travels over ground the team had previously ascended anyway, the team were very happy with the choice too.

On summit day we climbed aboard at 3.30am and headed upwards.  Once out of the snowcat, the route ascends a steep slope before beginning a long diagonal traverse under the lower east summit and eventually this leads to the saddle that sits between the east and west (main) summit.  We always take a high ratio of local guides to clients on summit day and this is extremely important.  It allows for us to safely guide any struggling team members down separate to the main group if needed and also allows for us to adjust to different paces.  For this trip we had 4 local guides as well as myself.

This planning and preparation paid off quite quickly as one team member, realising he’d given his all, decided to descend at about 5200 metres and another ran out of steam at the saddle.  We were desperately sorry to see them descend, but knew they were in the safest of hands.  The rest of the team continued upwards.

After the saddle the route leads up very steep slopes that, because of a long and potentially very serious slip potential, are protected by fixed ropes. The team had been thoroughly briefed on the use of these and everyone expertly clipped and unclipped themselves safely up to the top of these.

From there, the summit is very much within manageable distance and we continued to climb up gentle slopes to achieve our goal.  As it had all week, the weather remained stunning and we were treated to the most amazing of summit experiences.  Elbrus has simply stunning 360 degree views and feels like a very special top.  The team were delighted.

Eventually, once photos were taken, snacks were eaten, water was guzzled and hugs were exchanged, it was time for down.  The return route is a direct reversal of the ascent and, although long and tiring, was managed efficiently by all the team.  Eventually, a tired but ecstatic group walked back through the hut door still trying to process their achievement.  We caught up with our other team members and soon we had many people resting and others having lunch before resting.  It was that glorious feeling of fatigue after a tough mountain day – and the equally glorious knowledge that all that remained was a cable car descent the following day.

After a very solid sleep we said goodbye to our mountain refuge and headed for the valley.  By mid morning the team were enjoying the luxury of hot showers and fresh clothes.  Many of the team met up for a leisurely lunch and later, we were back out again for a celebration evening meal and more than our fair share of Elbrus beer and vodka.  It was a very special evening with a very special team.

The final day started a long journey home and this report was written on one of the return flights.  Dotted around the plane were other team members and others had already arrived in the U.K. via other routes.  We also had a few who took the opportunity to spend a final night and day in Moscow before heading home.  I hope they all, like I certainly do, look back with very fond memories on a very special adventure.

Peak Mountaineering will be heading back to Elbrus in 2020 and I really hope, having got a taste of what’s involved, that you will consider joining us.  A great adventure to a majestic mountain in a stunning part of the world awaits. 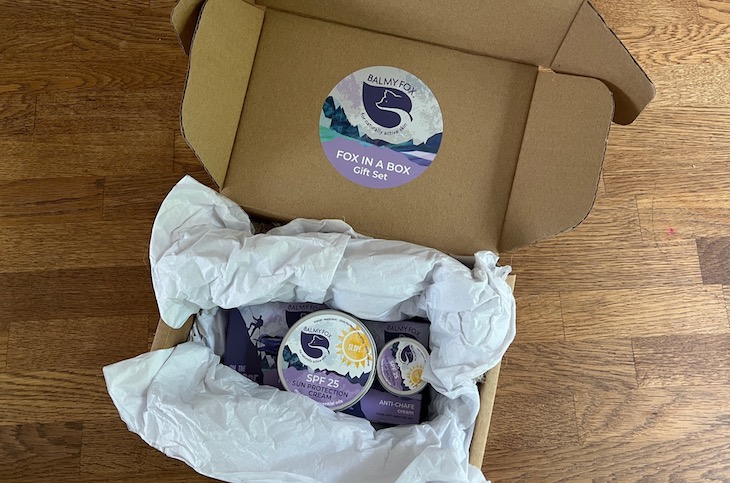 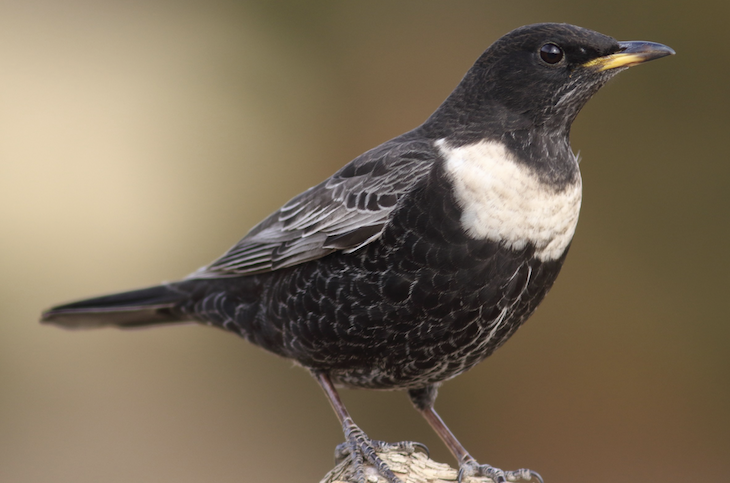 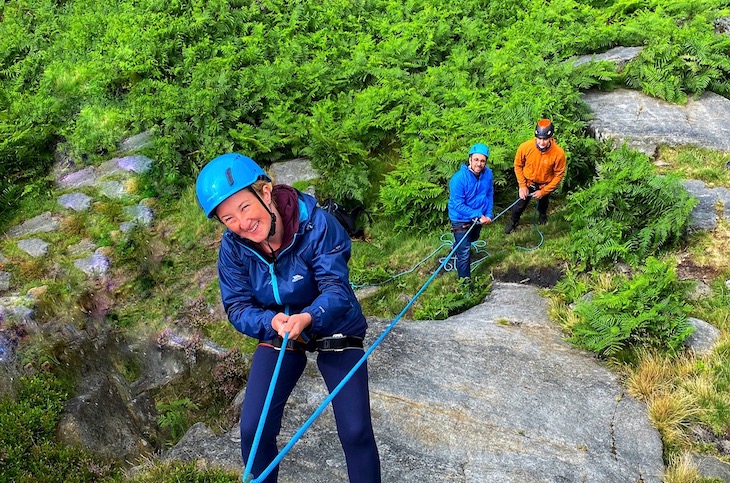 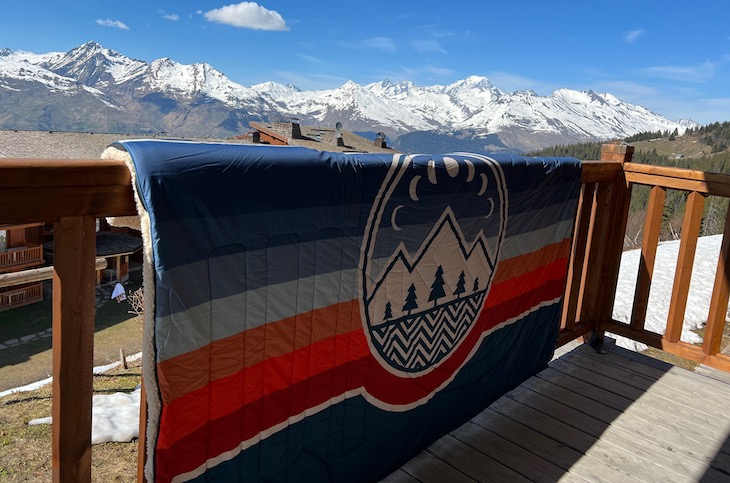