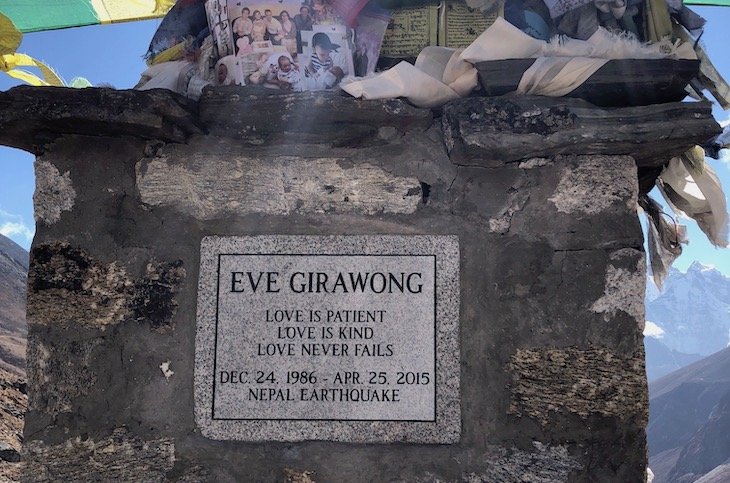 The tragic 2015 Nepal earthquake triggered an avalanche at Everest Base Camp. Memorial to Eve Girawong is a tribute to one of those lost.

On the journey to Everest Base Camp you come to a small dusty cluster of buildings at a place called Thukla.  It is a popular lunch spot before a long steep ascent towards Lobuche leads you via a memorial garden at the 16,000 foot Thukla Pass.  I always find this a very emotional place to stop and contemplate.  There are memorials to western climbers, Sherpas and several remembering non climbers too.  Often the inscriptions are strikingly personal and one or two even have small personal items embedded into the covering plasterwork.

Some of the stone structures remember mountaineers you may have heard of. Others are less widely known.  I could spend a long time in this place and often do.  Many lost in the Himalayas are lost in small numbers, but sometimes individual events cause the loss of many at once.  In 2015 the devastating earthquake caused the deaths of over 2000 across Nepal and the avalanche it triggered at base camp took 19 people in one swipe alone. I wrote about this in my blog post Living With Loss.

I was at the memorial garden again last November. After wandering around I soon felt drawn to sit near a stone cairn. The stone structure was dedicated to one of the avalanche victims.  But it was also different. Most of those remembered at Thukla were mountaineers focussed on a summit. This was a memorial for someone whose sole focus was helping others.  This was a memorial to Eve Girawong.  I knew little about her at the time,  but it has been humbling to find out more.

In 2015 Eve was the 28 year old base camp doctor for the 2015 Madison Mountaineering Everest team. The avalanche caught Eve when it struck base camp on that fateful day.  From what I can gather it seems Eve had been inside a mess tent with others and had gone outside with them to see what was happening.  As they realised an avalanche was approaching some returned to the tents while others sought protection behind rocks.  The avalanche blast caught Eve and she suffered a fatal head injury.

I researched Eve’s short but packed life and was immediately drawn to the heartfelt memories posted by many.  Eve was born in Thailand but grew up in New York before moving to New Jersey. After graduating with a degree in biology she went on to complete physician assistant studies. She later added a masters degree in medical science.

Eve then worked in the emergency department of a New Jersey hospital. She had a love of travel and soon found her calling in the practice of medicine in remote and high altitude locations.  She had since embarked on the prestigious Diploma in Mountain Medicine at the University of Leicester but had taken the time out to spend 7 weeks serving as the team doctor.

I searched online and the same message shone through each time. Every single comment focused on her love of life, her outgoing personality and her totally selfless nature.  Have a search and you’ll see what I mean.

In the obiturary he wrote for the British Medical Journal, Jasmin Malik says ‘it was impossible not to smile when in the presence of Marisa Eve Girawong. Her compassion and love for life were evident from the moment you met her. The light she cast never seemed to fade. You knew instantly that you were in the presence of one of the kindest and most genuine of souls.’

Mountaineer Alan Arnette shared his thoughts about Eve in an interview with Rock and Ice magazine. He described Eve as a ‘tiny, petite young woman with a huge heart. As our team doc, whenever someone coughed, she was on it. She let nothing go by. At dinners she insisted on helping serve the meals. Once she surprised us by spending all day making homemade crepes for dessert that night. She was unselfish, compassionate and giving. She was having a great time at BC.’

There are many more.  Her passion for helping others and love of life shines through in every piece you read.  Infact, my favourite bit of info comes from Eve herself.  In a couple of sentences she shows her sense of humour perfectly.  Her very last Facebook posting says ‘Day 28 on this arduous journey. Snow is falling and my food cravings are at an all time high. Is a crunchy spicy tuna roll with eel sauce too much to ask for?’  Of course the memorial to Eve Girawong is only one of many there. Rest in Eve and all the others that lost in the mountains of Nepal.

We pass by the Thukla Pass Memorial Garden on both our Everest Base Camp and Kala Patthar and Island Peak expeditions.